Pastor A. Glenn Brady has dedicated his life to ministry. Growing up in Youngstown, OH, the only child of Adolphus & Marian Brady, he served as an assistant to Bishop Norman L. Wagner & the Mt. Calvary Pentecostal Church for over 35 years until he became the pastor in June of 2009 of the New Bethel Church in Kansas City, KS. In just a short span of time, under his leadership, the membership has grown exponentially with the on-going development of nearly 50 ministries. As a result of the tremendous growth, plans are now underway for the building of a new sanctuary and worship center. In addition, he serves as the interim chairman of the NBC Community Development Corporation to facilitate the many on-going outreach projects in the Kansas City community.

With a long extensive service record with the Pentecostal Assemblies of the World, Inc. [P.A.W.], in 2003 he was elevated to the office of Suffragan Bishop for the 31st Episcopal District (European Council of Nations) and later was transferred to the 14th Episcopal District (Northwestern District Council). After being elected in 2004 as the Assistant General Secretary, for the P.A.W., he was unanimously elected both in 2007 & 2010 to serve as the General Secretary. Then in March of 2013 he was elevated by the P.A.W. Board of Bishops to the esteemed Office of the Bishopric and assigned to the 46th Episcopal Diocese (the Hawaii District Council). Bishop Brady also serves as an Executive Editor for The Christian Outlook.

In addition, Bishop Brady is the chairman of Gosplode Ministries, International and the Abundant L.I.F.E. Seminars, and serves as president of The Brady Resource Group. Graduating from Youngstown State University with his bachelor’s degree in business administration, he furthered his education by attending the University of Akron School of Law in Akron, Ohio. In 2003, he received from Aenon Bible College in Indianapolis, IN, an honorary Doctor of Divinity degree.

A gifted speaker, educator, lecturer and author, Bishop Brady has traveled extensively around the world, having visited over 35 countries on five continents. Specializing in leadership development, he is sought after around the world as a seminarian and inspirational speaker. He married Angela R. Watts in 1982, who often joins him in ministry. They are the proud parents of two lovely daughters, Amaris Jené & Alexis Gian.

“In life, finding a voice is speaking and living the truth. Each of you is an original.

Each of you has a distinctive voice. When you find it, your story will be told.

You will be heard.” 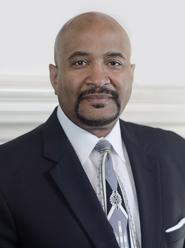